For our family, the great phone shuffle began a few weeks ago, just after Apple’s Iphone 7 announcement on September 7.  We rarely buy new phones, yet the release of Apple’s newest Iphone usually starts us thinking about upgrading to someone’s hand-me-down.

As luck would have it, we made several good trades and now we have two SEs, a 5S and the lone Android — mine — a Galaxy Note 5, in service.

Phones Are The New Laptops

As Verge has so astutely noted, “The single-core performance of Apple’s latest generation of smartphone processors has basically caught up with Intel’s laptops CPUs. The A10 chip inside the iPhone 7 comfortably outpaces its predecessors and Android rivals, and even outdoes a wide catalog of relatively recent Mac computers.”  Verge then goes on to argue that perhaps it is iOS and not OS X that should be the new Operating System (OS) standard.

Which is yet another reason that every so often our household has to go through the major overhaul phone shuffle.  I cringed when I shelled out over $300 for a used Android phone.  When I did it again with a used iPhone, my senses had already been numbed.  Yet, I’m slowly learning to think of the smartphone as a standard computer replacement.  Case in point, we have just one desktop system left, a handful of laptops and enough tablets for everyone.  We are changing the way we compute, with mobility being the most useful feature a device can offer.

Add to that, it doesn’t matter what kind of device you have, you’ll still pay your phone company the same amount for service.  It doesn’t make a lot of sense to shell out hundreds of dollars a month for service on slow hardware.

After several rounds of buying and selling, I’ve established the following rule for myself: If I can get a desired technology product less than two years old for half of its original street price, it’s a good deal.  Conversely, if I can get half of my money back when selling a relatively new good to others, that too is a good deal.

There is actually a better way to find the real market price however, and I employ it regularly.  First, go to Ebay and search for the product using advanced features.  The advanced features button is tricky to find, printed in small font just to the right of the search button.  Using the advanced screen, type in your search terms and be sure to check off the selection for completed listings.

As for whether you can get one for around that price, check Craigslist.  What you’ll usually find is that most people want more than what the Ebay market would suggest.  Prices are negotiable, so I usually start at or just below the Ebay price.  Quite often the offer is accepted.  If not, there may be a counteroffer.  For phones, I meet the seller at the carrier to make the exchange and to be sure the phone works correctly.  So far, this process has worked out well.  Some phones are in far better condition than I expected, some not so much.  All of them so far though, have worked fine.

I’ve been on Sprint for nearly a decade now.  I have no intention of switching: service is great and they’ve always kept their word.  I know this statement will elicit disagreement with some people, but I came from Verizon and my experience with them was horrendous.  Verizon transmission speeds and coverage were good, but I was constantly on the phone trying to fix false billing.  At least I didn’t wait until Verizon created a $9,100 charge like they did with this woman.

In any case, sticking with the same carrier has several advantages.  The first advantage is that you’ll have compatibility.  One of the downsides of Sprint service is that Sprint uses slightly different communication bands than other carriers; some devices are specifically designed for Sprint.  The other advantage is that — at least at Sprint — you won’t get charged for activating the device on your carrier’s network.

I’m beginning to think of this process as somewhat more cumbersome than preparing tax return documents.  It’s necessary, but the amount of time and detail that goes into it is substantial.  My other thought is that the amount spent on communication services has increased for most families.  According to the Consumer Price Index (CPI), the price of Communication Services has dropped six percent over the last 10 years.  However, we demand so much more than we did ten years ago.  That is, we no longer have just one flip phone for the entire family.  Rather, we have high end devices for everyone. I’ve even seen families including kids as young as six years old.

Tue Sep 20 , 2016
“I’m going to find it,” she declared emphatically I too had heard it — the day before.  I thought it was just thoughtless bubul birds fighting over an overripe papaya, so I ignored the sound.  Her son had heard it too, first in the morning and then throughout the day. […] 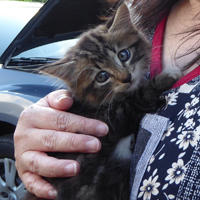