June 6, 2016 Duc Ong, a physics teacher at Kaiser High in Hawaii Kai, is among the 24 teachers selected to attend Data Camp in Fermilab in Batavia, Illinois. Data Camp is designed to be an introductory workshop for both new and veteran teachers of physics and physical science to learn about particle physics and high energy physics. [UH Manoa]

June 2, 2016 When Hawaii Kai resident Hunter Long drops in at the X-Games in Austin this weekend, she won’t only become the first female skateboarder from Hawaii to ever do so, she will be the contest’s first skater from Hawaii, period. [Hawaii News Now]

May 31, 2016 Hawaii-based hamburger chain Teddy’s Bigger Burgers will part with its 1950s-inspired diner design and switch its name to Teddy’s Steak Burgers, owners confirmed with PBN this week. [PBN]

The chefs from Kale’s Deli, formerly at Hawaii Kai Shopping Center, are now cooking for Juicy Brew in Hale Pawaa (1401 S. Beretania) and Kaimuki (Waialae and 8th). The menu is mostly Vegan and they are highlighting local ingredients. [Facebook]

Fri Jun 10 , 2016
Warehouse clubs offer great bargains, but only if you can take advantage of the quantity.  This article highlights the preservation of peeled garlic. You’ve seen the bag of garlic at Costco and Sam’s Club.  It’s fresh, it’s peeled, and it comes in a whopping three pound bag.  Most of us […] 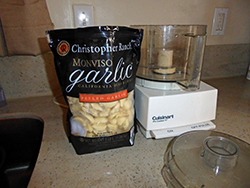