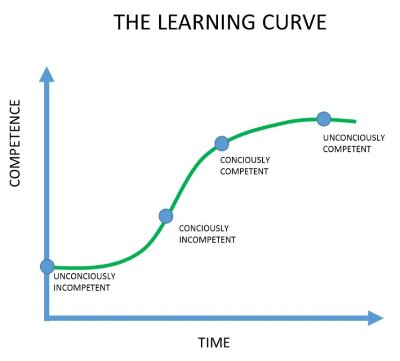 The more I work at trying to learn Japanese, the more I think that schools shouldn’t make world language mandatory.  It’s not that I’m not progressing; I am.  In fact, more so than when enrolled in formal classes.

It really boils down to the learning curve and the amount of time students have to focus on all of their studies.  Foreign language is an exaggerated version of the typical learning process.  Think about all of the time you had to learn your first language.  You had probably heard no less than 10,000 words before you first uttered your own.  To illustrate,  I found a graph from James Ryan, via LinkedIn.

Essentially, it boils down to the space between “you can’t know what you don’t know,” i.e. “unconsciously incompetent” and the next phase, “consciously incompetent.”  This particular graph is drawn somewhat how I expect for a foreign language.  There is a very long period between the two and nearly no progress.  I fear this is where most of us get stuck.  As a toddler, you had no choice but to continue.  As an adult, you do.

In his book, Outliers, Malcolm Gladwell famously made the 10,000 hour rule a household phrase among tiger moms.  Essentially, Gladwell provides empirical evidence to support his idea that it takes no less than 10,000 hours for someone to become proficient at what they do.  Those that get a head start — for example, kids in Little League born earlier in the recruiting group — are often given more encouragement and are more likely to continue to practice and to grow.  Ultimately, however, it is the actual application of practice that makes them “prodigies” and not any special inherent talent.

That’s another shortfall of foreign language in the classroom.  Looking back, didn’t you hate how some of the kids had vast exposure to the language while others did not?  It’s enough to make you not want to start your 10,000 hours at all.

For me, I failed at foreign language proficiency over and over again.  First at Japanese language school as a kid, then in middle school and high school while taking French and even a bit of Japanese again in high school — which I honestly took just because my mother speaks Japanese and I would be one of those kids you hate in class.  When I say failed, I don’t mean my grades.  I mean the final result.  Taking Japanese in high school did serve its purpose.  I got good grades, but that’s because I had a stronger foundation to begin with.  I just couldn’t be trusted to communicate effectively with anyone in Japanese.

I’ve often wondered how people become proficient in foreign language.  This time, largely inspired by one of the Niu Valley Japanese instructors who was successful, I’m determined to give it a consistent effort for one whole year.  To be realistic about whether or not this is something anyone can do, I’ve dedicated a reasonable amount of time to doing so, an average of 30 minutes a day, about 183 hours for the whole year.

So far, it’s going better than I anticipated.  I’m planning on sharing some of the techniques I think are working, and some that are not.  Not surprisingly, the current method of teaching world language in schools ranks low on the effectiveness scale.