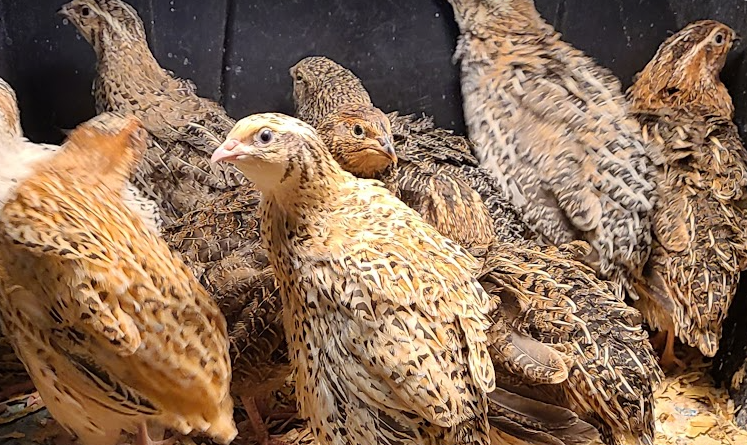 Over the past few weeks, I’ve received a couple of inquiries about quail. I am still raising them 2.5 years after the first COVID-inspired hatch. During this period, I’ve had 11 hatches (with incubation) and purchased quail or eggs from four suppliers.

When I say suppliers, that’s loose terminology. My initial hatch was from eggs sent from the Big Island. Since that time I bought birds from someone’s backyard pair, my neighbor, and a guy from Halawa Heights who sold me jumbo-sized silver-line Coturnix. Other than the eggs from the Big Island, all of the other connections were made through Craigslist.

Honestly, breeding line counts. The silver-line Coturnix from Halawa Heights were my favorite. My birds are a really nice size and gorgeous. Most of the offspring surpass the 12 ounce mark, making them jumbo.

Recently, we just did another hatch. These birds are now five weeks old and living outside. Prior to that, I sold hatching eggs to a retired couple and loaned them the incubator so they could hatch their own. They kept eight and returned two males (something I’m willing to do, because most people don’t want to raise the birds for meat; they just want eggs and pets).

Dialing back in time, after one year of raising quail, I addressed the question of whether to continue or not. In the end, it wasn’t the eggs that convinced me to continue, but the poop. Having a regular source of composting material and manure really upped my gardening game. When dry, there is little to no smell. I usually collect 2/3 of a trash can full, then throw it into one compartment of the rotating composter and wet it down. It smells for about 2-4 days, then the odor subsides. Three weeks later, it’s cool enough to mix with potting soil for a hearty blend of growing material.

These days, I’m keeping no more than two dozen. I can pay enough attention to them, but not so much attention that they become pets with names. I’ve learned to rotate my stock so they usually get two years of life before being rotated out. I’ve noticed that at two years, they slow down considerably, and if kept with younger birds, will be rotated out on their own due to the birds’ pecking order.

In a sentence: YES, still raising quail and YES, they are a key asset in the search for sustainability.