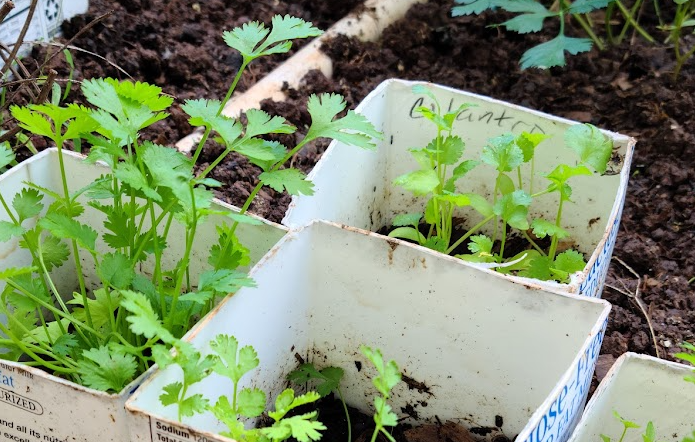 I’ve always liked starting plants in milk cartons. The cartons are durable enough to last until they finally go into the ground permanently, and can easily be cut away when needed. This was my starting point for reattempting to grow cilantro.

First, I microwaved the cilantro seeds in water at 10% strength for 20 seconds. Then, I let the seeds soak in water for a week, changing out the water 1-2 times daily. After prepping the seeds, I placed it into milk carton pots, which were cut to about 2/3 of their full height. The seeds were then lightly covered with dirt and watered until they sprouted.

Once sprouted, they stayed in the container until nearly all of the seeds had grown four or so real leaves each. Then, I moved the plants to the garden but kept them in their milk carton. Only the bottom of the milk carton was removed. You can use a utility knife or a scissors — the cartons are easy enough to pierce through. I dug a hole big enough to fit the milk carton into, then lowered it into the ground. Currently, they’re still surrounded by the carton. There’s no need to remove it. The plant can grow deeply into the ground while not being disturbed by slugs and snails at night.

I’m calling this one a success. Every week or so, I’ll start a new container, then I should have a nice rotation going so there’s always some fresh cilantro on hand for cooking.