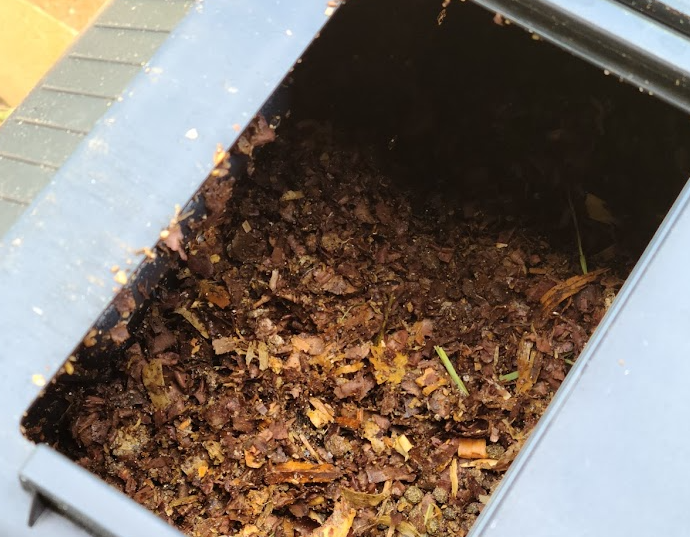 The high goal remains elusive to most households. There are a number of reasons, not least of all, having too few compostable materials needed for processing.

I’m not saying this to be discouraging. Rather, I’m pointing it out for anyone considering starting; or who, like me, tried and failed for five years before reevaluating how to make waste renewable.

Most families don’t have the right tools or the right garbage for composting. Traditional composting materials are largely divided into two types: greens and browns. Browns are dried paper-like materials that one might use in a campfire. Dried leaves are an example of a brown material. Greens are high-nitrogen food scraps that when warmed and kept moist, start a chemical reaction that heats up until it burns out. Fruit and vegetable peels fall into the category of green material.

When you consider how the average American eats, it shouldn’t go unnoticed that few of us have enough plant material to start and continue the process. Traditional composting also does best when performed in large mass. The more material is in the heap, the more likely it will successfully combust then decompose. Traditional composting is like building a bonfire of material and providing it with oxygen for fuel by aerating it often.

Given the prevalence of ready-to-eat and take-out meals, traditional composting might only work for avid gardeners who cook their own meals. The green bin for trash will have to suffice for others.

Fortunately, there are more ways to compost than just the traditional method. I’ve stepped through several of these myself.

Here are some of the methods I’ve tried for recycling waste material.

In conclusion, if you want a furry friend who eats your carrot ends and gives you no-fuss compost you can immediately use, get a rabbit. Skip the Bokashi, at least two people (out of the two known here) have declared it a failure. Get worms for your ordinary composting. If you find that worms are not enough and you have more material to work with, go for the traditional (and oversold, in my opinion) method of composting.