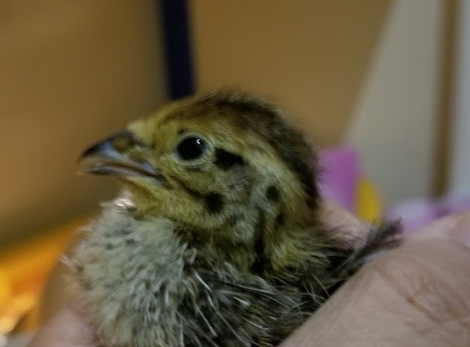 In the midst of the pandemic, some high school friends and I had a videoconference reunion. One of my friends had gone on an unlikely life journey: leaving Hawaii, graduating from a top-notch college, moving from the West Coast of California to the East Coast of New York, finding riches and rewards on Wall Street, leaving for a PhD and professorship and finally giving it all up to settle down in the middle of the nation on a farm in Illinois to raise and train parrots. You can’t make this stuff up. By the way, this friend also went on to write a book, which I am unabashedly plugging here. Bird People by Letitia L. Moffitt chronicles parts of her life journey, and I think Hawaii readers will find a lot in common to identify with.

But back to the subject. The reason I bring this up is because she questioned whether I really needed to cull male quails. She has chickens, and they’re all hens. When I asked her how that could have happened, she replied that, “We have people.” Well, if you raise quail in Hawaii, you don’t have people. You are the people.

Before I started my pandemic self-sufficiency journey, I also questioned whether I could cull a quail. Fortunately, in my first batch, I got one of those legendary males. The ones that jump anything that moves, strike terror in other birds and crow 24/7.

I did everything I could to keep him, even separating him so he wouldn’t injure the others. One day, he made a mad dash for it, ran outside the cage, jumped over a wall and into the neighbor’s yard where her retriever dog couldn’t believe his luck! We managed to catch the quail before the dog did, but that’s when I realized there wasn’t much of a future for him. I took him to the sink and said goodbye.

That night, it was my cat that couldn’t believe his luck. He got a fresh quail liver; whatever was in it was potent. The cat spent the night pretending he was a mountain lion and pouncing on me at every opportunity. After this adventure my husband likened dispatching quail to preparing fish. He’s happy to eat it, but he isn’t going to kill it. My son, whose bedroom window is near the quail pen, asked what took me so long.

I’ll never be comfortable “playing god” with the flock, but if I have to do it, at least I’ll be a benevolent god and not waste nature’s precious resources. I’ve become more circumspect about having to cull the males. My birds are treated far better than anything coming out of Foster Farms, and when their end comes, it is quick and humane. Today, I look into one of my cages where there is harmony and I realize that it is important for the remaining birds to be happy.

Throughout this adventure, I’ve discovered people’s reaction to my quail dispatch has been mixed. For many, it’s a subject of awe: a wish to do it themselves if they had the courage. For others, disgust. I fully accept the disgust of vegans and to some extent, other vegetarians. To the rest of them, I have to ask — where do you think your chicken comes from? My birds treated far more humanely than factory poultry.

These days, I consider myself a climatarian and permaculturist. When it comes to eating, I’m 100 percent omnivore, but I carefully consider the larger effects of my choices. Beef is rarely on the menu, fish and seafood are eaten more often if its sustainably harvested, pork is preferred to beef and chicken preferred over pork. Most of all, I’m far more conscientious about not wasting food. If all of us continued to eat the same types of food, but made sure not to throw out spoiled or extra food, we could reduce global warming by 10 percent. And with wasted meat, there’s the added understanding that an animal was sacrificed for the meal.

Dispatching quail will never be easy. Despite what some say, it hasn’t gotten easier for me. Yet, while there are moments of sadness, all of that is washed away by observing first-hand the cycle of life. Or, as the cat and my son would say, “What took you so long, Mom?”