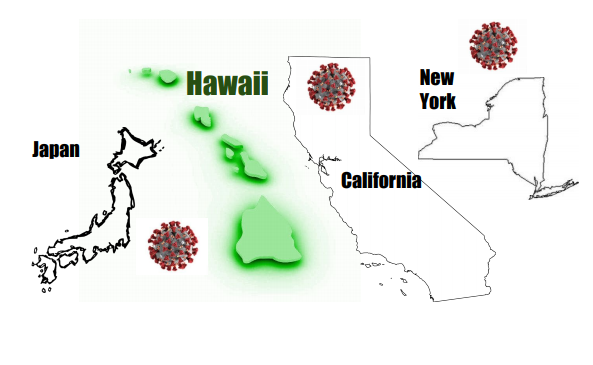 I can’t say this enough. Take this seriously, very seriously.

[Direct link to chart] Note: this chart updates daily from covid19chart.org. Data may differ from official state counts due to timing or entry in the John Hopkins daily database where worldwide information is collected.

In the first days of outbreak discovery, the rate of increase can make a huge difference. Each of these charted areas started with 25. Three weeks later, Japan was at 228, California was at 2,538 and New York was at 44,876.

Needless to say, Hawaii wants to be more like Japan and less like New York. Japan instituted strict orders and immediately closed its schools. It encouraged companies to allow employees to stay at home, but surprisingly did not mandate it.

In Japan it is considered polite to wear masks as protection for others. Given the prevalent use of public transit in Japan’s crowded cities, I am beginning to believe this may also be a critical difference in halting transmission of germs.

Unlike Japan, New York was slow to react to the CoronaVirus outbreak. Although the Governor eventually ordered stay-at-home orders, these orders were issued on March 22, after nearly 16,000 cases were recorded.

Notably, although the New York Governor issued strict orders, the Mayor of New York City refused to issue a strong statement on activities in New York City, and it was several days later before the busy metropolis shut down. Six days after the initial order, on March 28, the New York count exceeded 52,000.

Right now, Hawaii’s initial trend looks similar to California’s. What occurred in California was something of a miracle in our bureaucratic world. On March 16, six counties in the San Francisco Bay Area got together and collectively decided to issue a shelter-in-place order to its residents. It was a bold, bold move.

That move precipitated an alarm across the state and eventually across the country. On March 19, California’s Governor issued a statewide stay-at-home order. The results are apparent. On March 28, when New York exceeded 52,000, California’s count stood below 5,100, despite having a total population more than four times greater than New York’s.

What I am trying to drive home here is that each and every one of us plays a critical role in how quickly the CoronaVirus spreads in Hawaii. We are the only island state, and we depend upon one another greatly. An outbreak here would be devastating to human life, given our dependence on the import of supplies to support our 1.4 million residents.

I cannot stress this enough. Stay at home. Wear a mask or face covering when you do go out for necessary tasks like grocery shopping. If you are young and have no health issues, shop for those that do. We have Aloha. We’ve always had Aloha. Now is the time to revisit the true spirit of our community.

Let’s flatten that curve so that we won’t have to make heart-breaking decisions on who gets to live and who doesn’t. We can do this, Hawaii.