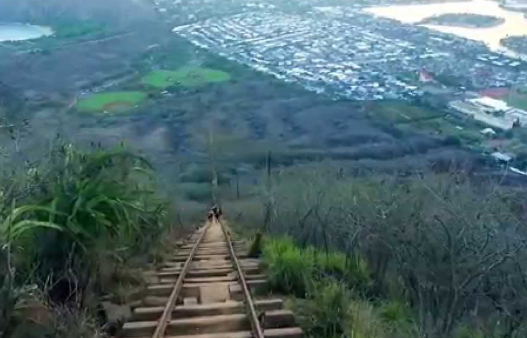 From the September 30, 2019 Honolulu Star-Advertiser article, “Diamond Head’s popularity with visitors keeps it in the top position on a list of sites requiring rescues.”

(On the same day this Star-Advertiser article was published, an 18-year old was airlifted from Koko Crater to safety, then transferred to Emergency Medical Services for treatment.)

At Koko Crater Stairs, which is the second highest hike rescue site on Oahu, with 125 over the same five-year period, there are a growing number of hikers, as well, but more cases of twisted ankles. Some may trip and fall, and hit their head. Others suffer from heat exhaustion.

Jane Howard, president of the Kokonut Koalition, a group advocating for the renovation and maintenance of the stairs, said she has seen many unprepared hikers climbing up Koko Crater.

The rescues are inevitable, she said, due to people who are unprepared.

She regularly sees what she calls a “Waikiki contingent,” which includes visitors who go up casually in sandals, heels and dresses, and others who bring one bottle of water to share among four.

“I see people that underestimate how vigorous it is,” Howard said. “They may not have done real physical exercise in 10 to 20 years. You head on up, then you get fatigued.”